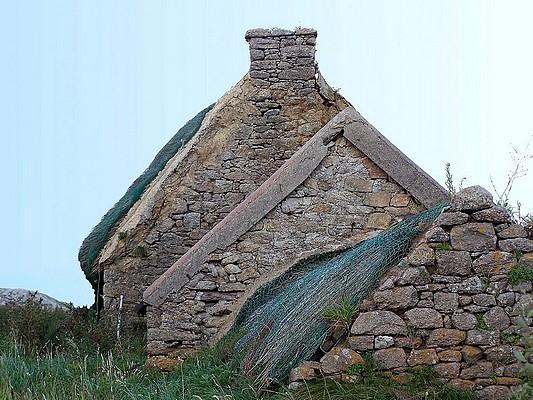 This cottage located at the entrance to Meneham was comprised of two dwellings prolonged by mangers.  The cottage housed the village cafe where all the fishermen would meet.

It was open from 1936 to 1973. You could play bowls, Kilou Koz (game of skittles) or La Galoche (quoits) and you could dance the famous Round Pagan (a Breton dance).

This building became an inn in July 2005 and offers traditional cuisine and home-made delights.

This building owes its name to its last tenant.  It dates back to 1833 and has a well, the only one in the village in the shape of a half-dome.

The house has 2 outhouses and a "lochenn"  which is a simple shelter often made from the hull of old boats which were turned over on the hold and  covered with old fishing nets.

It became a museography in June 2009 devoted to the inhabitants of Meneham.